Relationship between MELODI and DoReMi

Home > About MELODI > Official documents > Relationship between MELODI and DoReMi

As their names aptly suggest, the two bodies are indispensable to each other, and in the beginning of the HLEG strategy implementation phase only make sense together: to con- ceive a new symphony and supervise its performance in a context where different musi- cians have so far tended to prefer acting as soloists or playing together in a small chamber orchestra, it is necessary to learn to work together, to practice together, and to start play- ing complex “multi instrument” music together in a full-size symphonic orchestra. This spe- cific relationship between MELODI and the NoE DoReMi is imbedded in the 2008 EURA- TOM call for proposal which took into account the results of the HLEG report. The key fea- tures of this relationship are described in this MELODI document n° 2, and are illustrated as shown in the diagram in annex.

Five national organisations, involved in the HLEG work, have so far committed themselves towards the first challenge, through the signature of a letter of intent (LoI) to start the mul- tidisciplinary European low dose initiative, called MELODI.

These organisations are currently engaged in setting up the MELODI Platform, with the ambition to gather in an open structure all institutions and other stakeholders in Europe with a long-term commitment in all kinds of low dose risk research and radiation protection. These should include all establishments and laboratories, already belonging or not to the “historical” EURATOM family, which share a common interest in solving the “overarching scientific questions” raised in the HLEG report. These “non-historical” EURATOM laborato- ries are expected to increase the multidisciplinary competence of MELODI to accompany its move from mainly biophysical models of radiation protection to more biochemistry and molecular biology based approaches. They are also needed to reinforce MELODI’s plural, transparent and independent expertise.

The main objectives of MELODI are to develop a strategic research agenda for low dose research in Europe (SRA) and road maps which will describe how the strategic goals can be met.

Less than one year after the adoption of the HLEG report, it is encouraging to note that some major recommendations have materialised and had a head start:

However, because of what may be perceived as an overlap, or at least as an unchartered area, between the respective objectives of MELODI and DoReMi, which are both sup- ported by some of the same LoI signatories, it is necessary to clarify the relation and mode of cooperation between the two. For this purpose, it is proposed to examine which key de- liverables are expected from each structure:

MELODI is mainly expected to develop a long term SRA for research and training in Europe on low dose risk issues, which is sufficiently supported by all stakeholders (including the scientific community, in EURATOM and beyond) to allow the EC and member states to rely on it to guide EU and national research and training (R&T) policies in this field (notably for the preparation of future FP programme calls). To do this, MELODI must succeed in building up an integrative platform, involving in an open and credible way all interested parties, without loosing sight of the HLEG strat- egy which it is committed to implement in its principles.

So, in short, the four key deliverables for MELODI are:

MELODI will do this, over time, by processing information and ideas produced by its con- stituent parties, including the scientific community, which naturally include (amongst oth- ers) the DoReMi “sub-community”. It seems clear from this analysis that several years will be necessary to reach this goal in a credible way. However, the implementation of the HLEG strategy cannot wait several years to start being implemented without loosing credi- bility.

DoReMi is the necessary complement to MELODI, aiming to achieve fairly short term re- sults in order to prove the validity of the HLEG approach, and to contribute to the devel- opment of MELODI. Such objectives and timeframe are typically consistent with what can be expected from a NoE, which is why the EC included the possibility of such a scheme in its 2008 call. The resources invested by the EU and by member organisations in the NoE will therefore aim to:

In practice, DoReMi Work Packages WP2, WP3, and WP4 will develop support structures for MELODI, on research infrastructure in Europe and on education and training operating in such a way that their deliverables feed directly as “draft contribu- tions” into the working groups of MELODI. DoReMi WP5, WP6, and WP7, which are concerned with the scientific issues of the shape of the dose effect relationship, the individual radiation sensitivity and non-cancer effects of radiation, respectively, will produce scientific deliverables from their research and training operational activities, which should constitute the first operational stepping stones on the SRA roadmap. These results as well as the experience feedback from such should also contribute to the furthering of MELODI goals, particularly at the time when the NoE will be nearing its completion. For this purpose, scientists in DoReMi WP’s should become also ac- tively involved in MELODI working groups, where the ongoing Low Dose Risk re- search strategies will continue to be developed year after year. 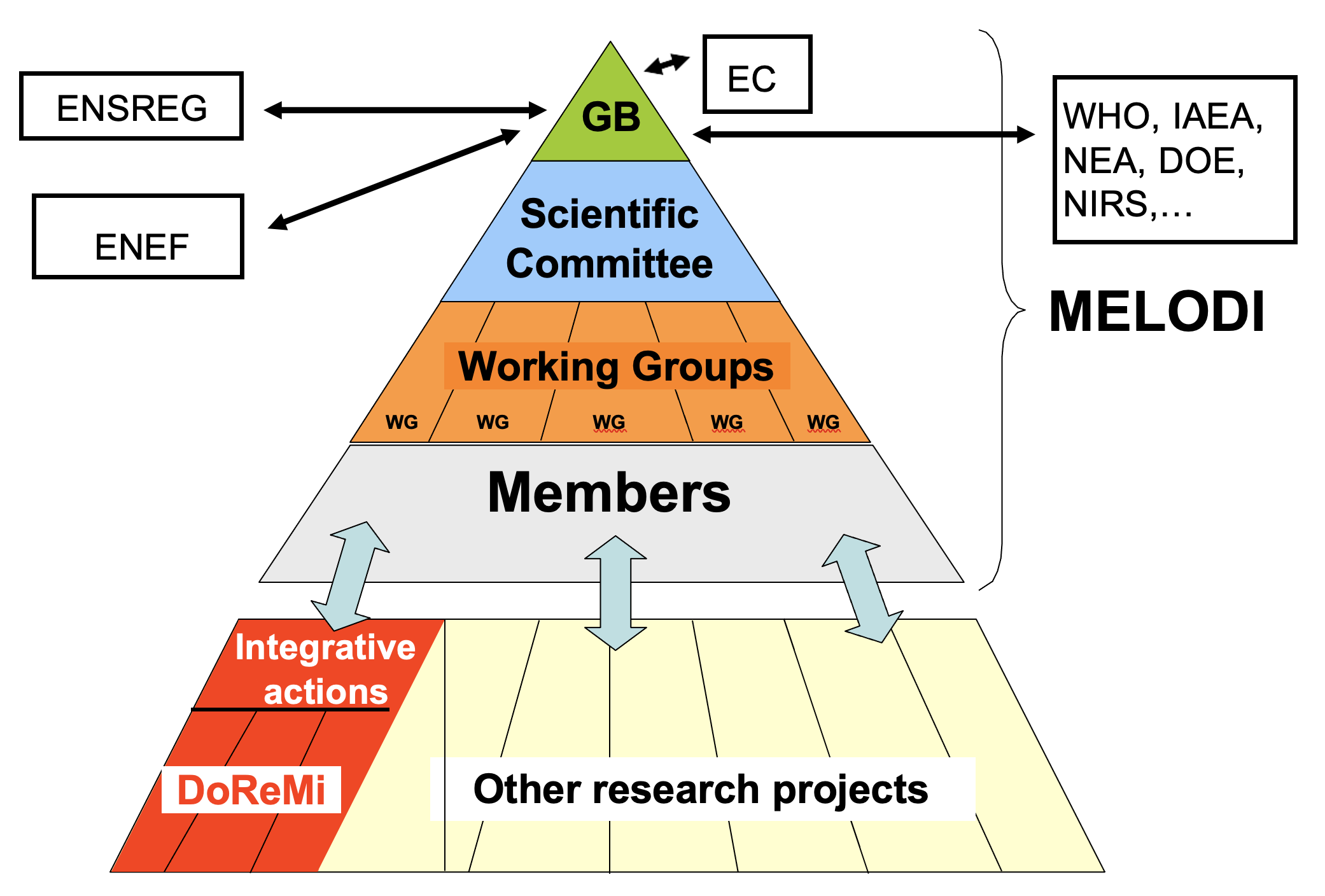